Did you know that you can teach your pet to sniff out certain odors, just like a working dog? It’s true! Today we’re going to share nosework training tips from a Tripawd Champ, Elly.

The Benefits of Brain Games for Pets

Interactive brain games for pets are great for every animal but especially for three-legged ones. Your goal as a Tripawd parent is to keep your dog or cat’s physical activity low-impact, and mental activity high.

Activities like food puzzles and trick training are great for Tripawds. They are a fantastic work out for the brain, and help burn energy for amputee dogs and cats, without putting extra stress on their bodies. And as Elly the Tripawd Nosework Champ discovered, they build confidence too.

Nosework is for Every Animal

This fun activity teaches animals to forage for a reward. All animals are born knowing how to do it. Any species can reap the benefits, but currently dogs make up the majority of participants. Wikipedia defines Nosework as:

“A canine sport created to mimic professional detection dog tasks. One dog and one handler form a team. The dogs must find a hidden target odor, often ignoring distractors (such as food or toys), and alert the handler. After the dog finds the odor they are rewarded with food or a toy. Nosework is a fast growing sport in part because it accommodates canines with disabilities or behavior problems.”

There probably isn’t an animal out there who can’t benefit from nosework games. Cats can make great nosework partners.

And even an exotic animal like a tortoise can play nosework games!

Nosework Tips from a Tripawd Champ

Elly the Tripawd is a nosework champion. Over the last few years, she’s earned at least a dozen titles in the sport. In her Discussion Forum post, “Elly’s Next Nosework Accomplishment,” Elly’s mom Karen celebrates this shy Tripawd’s success and explains how they got started:

“As far as training in Nose Work, we are under the National Association of Canine Scent Work or NACSW.  The AKC also has their version of Scent Work. There are some differences but the concept is the same- you teach your dog to detect and alert on certain odors. In both cases they are q-tips or swabs that have essential oil odor on them. For NACSW we use birch, anise and clove, I think the AKC does more.

If you are going to play real Nose Work I suggest you take a class or two.  Even if you don’t want to go to Trials it gives you some great skills to work on with your dog.

One of the foundations of Nose Work is showing your dog that ‘containers pay’.  The first 6 week class I took we never used odor, we only taught our dogs to search containers (usually boxes) to find treats.

How to Move to Odor Detection

The next step (and our next 6 week class) was to introduce the first odor (birch) in conjunction with treats, it’s called pairing.  Eventually the dog is just looking for the odor and you reward them when they find it.

Before I started Nose Work I played a game with Elly that I call ‘search’ and in fact we still play it sometimes.  In this game I have her sit and stay in one room while I hide treats in another room.  Then I call her and tell her to search. It can be made as hard or as easy as you like.

I also used it to help her overcome some of her fears- for example even though she is small she wouldn’t go under a chair. I think I started with her sitting in front of me with a couple of treats. I would put a treat on the floor and tell her to search.

I slowly moved farther from her, then I would set the treat up out of her sight, say the other side of the couch, but every time the command was ‘search’. She associated the command ‘search’ with looking for treats pretty quickly and then I increased the number of treats and the difficulty of the hides.

Sometimes I hide on only one or two treats, sometimes 8 or 9 (it taxes my brain to remember where they are!), we even play outside.  I’ve even got 25 or 30 little cups out and spread them around the room and put treats under 3 or 4 so she has too look at them all.  There are tons of variations, only limited by your imagination!

Be sure to account for whatever extra calories you feed with food games.

Elly is only about 15.5 pounds so a handful of treats can really have an impact.  Although both my pups are about the same size and Elly is much more active than my 12.5 year old Pug boy, her meals are about half the amount he gets because we do so many games and so much training.”

You’ll find it easy to get started in nosework. Most resources are focused on dogs, but  our creative feline members out there shouldn’t have a problem tailoring nosework tips for Tripawd cats.

Thanks for checking out these nosework resources on Amazon. Tripawds receives a small commission if you buy anything after clicking on them. Thanks for shopping with us! 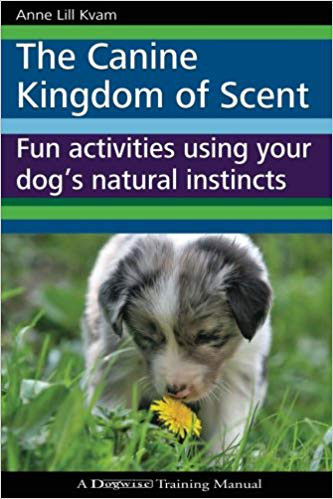 Snuffle Mat for Dogs and Cats 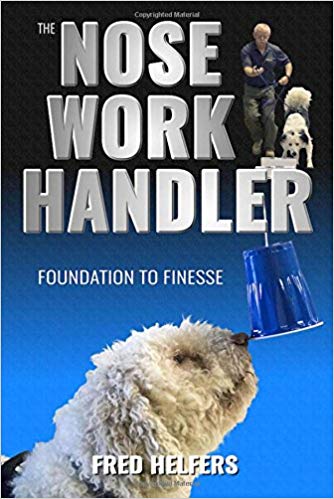 1 thought on “Nosework Tips from a Tripawd Champ”